How to set up fingerprint lock on WhatsApp for Android - OJASPRO :: How to tech
News Update
Loading...

How to set up fingerprint lock on WhatsApp for Android

How to set up fingerprint lock on WhatsApp for Android 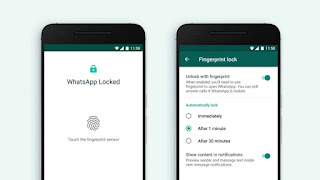 WhatsApp has finally introduced biometric locking of chats for its Android users, months after iOS got the feature.

WhatsApp took to its blog to announce that fingerprint lock for Android users is now available, adding another layer of security for users. All chats and notifications can now be lock by using the same fingerprint that is used for the screen lock, and even the time duration of the unlock can be customized. Options include every time, 1 minute and 30 minutes.

How to enable Fingerprint lock on WhatsApp
The process is pretty straightforward, especially for users who already have a fingerprint registered for unlocking the phone. Before starting, you need to be on the latest version of WhatsApp. For Android, the current latest build number is 2.19.308 on the PlayStore.

Once updated, go to WhatsApp’s Settings screen from the 3-dot menu on the top. Head to Accounts and then to Privacy. Scroll down to the bottom, and tap on Fingerprint lock. It will give you a toggle to turn on ‘unlock with fingerprint’, after which you will get further options to customize the time duration for how long an unlock will last. There’s an additional option to hide the contents of the notifications.

The feature has rolled out for all Android users, and works well for phones with physical fingerprint scanners as well as in-display scanners. For iPhone users, only Face ID is supported, which includes the iPhone X and 11 families. 3D Face Unlock is not supported on Android, so phones without a fingerprint scanner (such as the Google Pixel 4) are out of luck.